skip to main | skip to sidebar

A bit of music from the lamented Radio Blog Club

I have not a great deal to say about this important aspect, since choice is so limited for the Fulvia – at least if one wishes to preserve a “period” quality. The best solution technically would be full digital engine management with throttle bodies, fully programmable, and which would include the ignition system. With this type of equipment, rev-limiting and traction control are possible and the whole thing can be set up quite quickly on a rolling road. However, many would agree with me that this sort of equipment doesn’t belong on a Fulvia.

So for 99.99%, “fuel system” means carburettors and for most, Solexes (ugh!). The Solex carburettors fitted to Fulvias were poor quality and now after more than 30 years minimum, are frequently worn or rather, worn out. Since Solex went bankrupt years ago (sadly after the Fulvia and not before) parts are not easy, although overhaul kits are not hard to find. Those who have modified their cars will need to alter the jetting. Main jets can be bored out (drills in 0.1mm steps are easily found) whilst air correction jets, which will normally need to be reduced in size, can be soldered up and re-drilled. And don’t forget that with the absurd Solex design, the carburettors must be removed in order to change the main jets, not very practical for rolling-road tuning sessions.

The standard air cleaner arrangement is very restrictive. The best solution is to cut out all the metal inside the cover, weld up the hot air flap and cut back the inlet pipe to accept a piece of hose into which a modern cylindrical air filter may be fitted. The filter should be mounted to pick up cold air somewhere behind the right-hand headlamp. I performed this modification on a 1600 and the owner complained about an enormous flat spot at about 3000 rpm. Changes to the air correction jets cured the problem after which the car went better than ever, and proved that my view about the restrictiveness of the air filter was correct.

Some Fulvia 1300 owners are fortunate to have the vastly superior Dell’Orto DHLB 35 carburettors. These are proper quality, rare, expensive and worth it. I do not agree with many who consider them to be a satisfactory solution for the 1600 as they are too small in my view for proper top-end performance; what a pity that Dell’Orto didn’t make a 40DHLB! The flat spots many experience with the 42mm Solexes (on 1600s) are mostly caused by wear in the spindle bearings and other problems rather than any fundamental shortcoming in specification.

The other route for the better-heeled is to opt for Weber DCOEs or Dell’Orto DHLAs as used on the factory cars. These are much larger and require either a special manifold or a suitable adaptor that fits to the original component. These manifolds are produced but most that I have seen are poor quality and one I had to install would not even fit the car until I had filed and ground large amounts from various surfaces. And then I found that the casting was porous – and the owner had paid £300 for it. Disgraceful. The nicest solution that I have seen was the adaptor fitted to the 1972 Monte-Carlo winning Fulvia – “No 14”. This attractive piece was designed, I believe, to accept the 48mm Dell’Ortos fitted at the time, but look closely at the picture and you will see that the car is now fitted with 45mm Webers. 40 or 45mm carburettors are readily available with 45s being the most popular choice. However, I have driven a 1600 fitted with 40mm DCOEs and I must say that it went very nicely, with noticeably good torque. 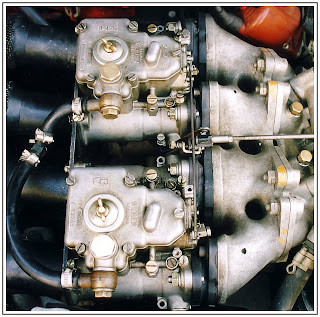 One problem with using these large carburettors is that they leave little or no room for a cold air box and all the installations that I have seen draw hot air from behind the radiator thus reducing both volumetric efficiency and effective octane rating (hot air is “nearer” to detonation than cold air). Some works cars had curved rearward-facing trumpets which I presume were an attempt to tackle this problem

One carburettor idea that appealed to me was to use four 40mm Amal or Kehin motor-cycle carburettors. Organising the throttle linkage would be challenging to say the least and the carburettors would be expensive, but I like the idea of a slide rather than a butterfly and I know that some racers (though not with Fulvias) had considerable success years ago with Amals. 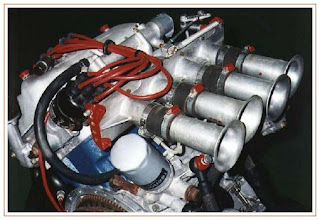 The final option is to use period fuel-injection equipment. And despite the fact that I love the Lucas system on my own car and also that I was involved in arranging a Kugelfischer system on another Fulvia, this approach can hardly be recommended as a realistic option – except for the very determined. Carlo Stella’s Competizione shows what can be achieved with proper development.

After all, I realise I wrote rather a lot - ah well, I do tend to ramble sometimes.

Next time: The first part on engine mechanical aspects.

Again a wonderfull read! If only we had more time and money:-D

I wish to experiment with a coldairbox design I'm working out at the moment. With room enough for long rampipes. I want to see on the roling road what will happen if I compensate the 4" portlenght difference with rampipes. Another thought is the idea of sleeving down the Solex 42 to 40mm. Venturis can be made on a lathe. The thing I cannot understand is the difference in port diameter vs carbsize. 32mm ports for a 1600 and 42 carbs with 36mm venturis. One would think that the narrowing down the carbs from 42 to 32 would upset things. Alfa 105series heads have bigger ports and can be opened op considerably.

If you look at the picture of the mystery engine I posted a few weeks ago you will see unequal length trumpets - some works cars had this - such as the 2nd F & M special.

Sleeving down the Solexes would be practically impossible: how would you re-drill the progression holes, and where would you get 40mm spray bars?

The point about carb size versus port size is that gas speed is critical - a gradual reduction accelerates the gas thus preventing "drop out"; large ports mean that higher revs are necessary.

Thanks Paul. Good to see you're not a fan of Solex! I'm still thinking about what to do with my mid- mounted engine. I agree modern injection wouldn't go with original Fulvii (what is the plural?), but I'm tempted with my 'modern' special. Some superbike throttle bodies with an aftermarket coil pack and ecu could prove to give very good power, driveability and reliability. The distributor is the only part that's ever failed on me (except for a valve spring - my fault!) and I wouldn't mind junking it. The only problem is the big initial cost of the ecu (at least £600).
Robert

I would say that the plural of Fulvia is "Fulvias"!

£600 does seem a lot I agree, but the biggest bore would be providing reliable mountings for the various sensors you will need - you would also need some sort of toothed crankshaft pulley for the sensor to read. I had a plan to mount Thema twin coil ignition on my Fulvia but never got around to it!

Radio Blog Club, a good friend for a while appears to be in some legislative difficulty...

However, in tribute to its brave effort, I shall leave the existing track on this page (which amazingly still works)

Sadly my Playlist no longer works (hence its removal) thanks to the absurd "Hadopi" legislation in France. Apologies to all.

Is it tea-time yet?

Paul
With 25 years’ experience of the wonderful Lancia Fulvia (not to mention experience of many other marques as well) I am able to offer an expert and personal service for Fulvia owners. In addition, I have some solid experience of the flat-4 Flavia and 2000 models. I am located near Cruseilles in Haute-Savoie, about 30km from Geneva. I am fairly well-known to Lancisti world-wide through Huib Guernink’s website http://www.viva-lancia.com/ where on the Fulvia forum, my many contributions may be seen and read. For a number of years I worked at Evolution Engineering (Lancia Specialists) in London, and was the manager there before I moved to France. 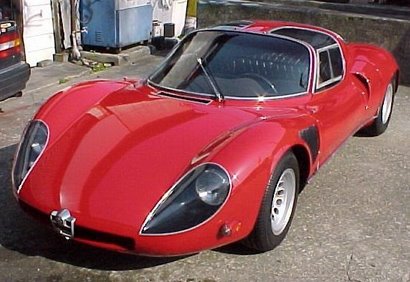 This time a 1968 Alfa-Romeo T33 Stradale; one of 18 built. This was I believe the most expensive production car in the world at the time.

A lovely period impressionist photo of the giant FIAT at speed in Dec 1913 at Ostende. See post 2nd December '06

A shot showing the lovely detail engineering of the Lucas Injection installation on a Ferrari 512M Le Mans car (Photo by me - I did a small amount of work on this bolide!) Click on the link in the posting (24th Nov '06) for a bigger picture

The stuff of which dreams are made: a Ferrari 250 SWB lightweight. Again, no lottery win...

I removed this from the the top of the page, but it's too lovely to lose altogether!

Another snap of the monster!